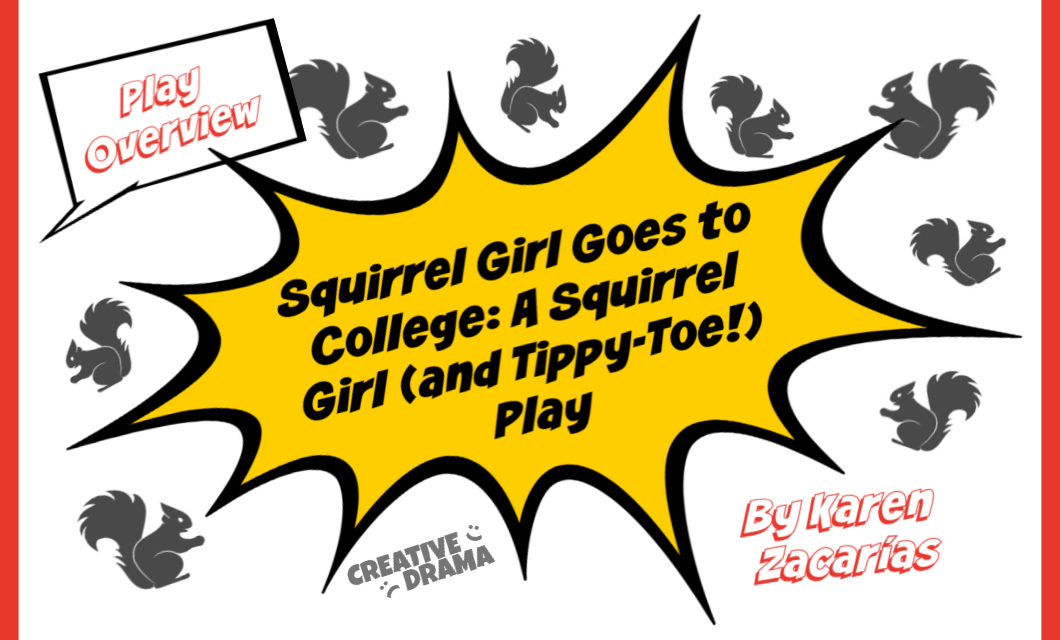 PLOT: Squirrel Girl, AKA Doreen Green, tries to make friends at college and succeed in her classes while hiding her super identity. Can she save the day without revealing her secret?

CHARACTER BREAKDOWN: 3 Females (one is a squirrel); 1 Male; 5 Any Gender; Ensemble (Squirrel Chorus and other small parts)

With Squirrel Girl Goes to College: A Squirrel Girl (and Tippy Toe) Play and their other Spotlight titles, the Marvel Universe is following the worlds of Harry Potter and SpongeBob to the stage. Marvel Entertainment brings the marketing power of their superhero catalog to schools, and they already know how to stand out… 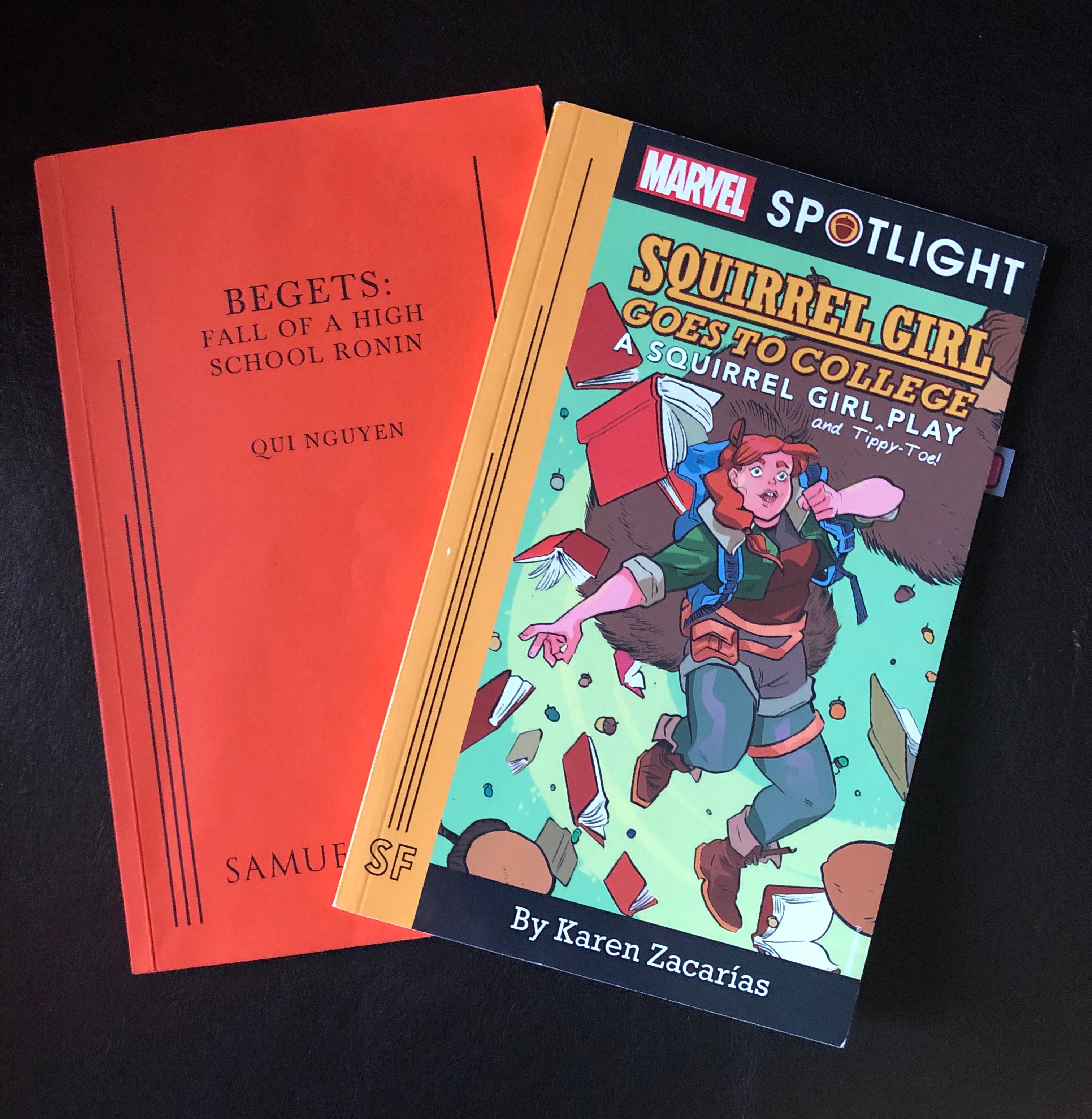 Just look at how the Marvel Spotlight edition stands out next to another Samuel French script I recently bought (here’s my play overview of Qui Nguyen’s Begets: Fall of a High School Ronin if you’re interested). Comic book colors, a fully illustrated cover, and of course, the Marvel logo.

But when you’re a massive entertainment giant, there are a lot of people involved in the decision-making process. The credit page is the longest I think I’ve ever seen in a script – look at all these names! 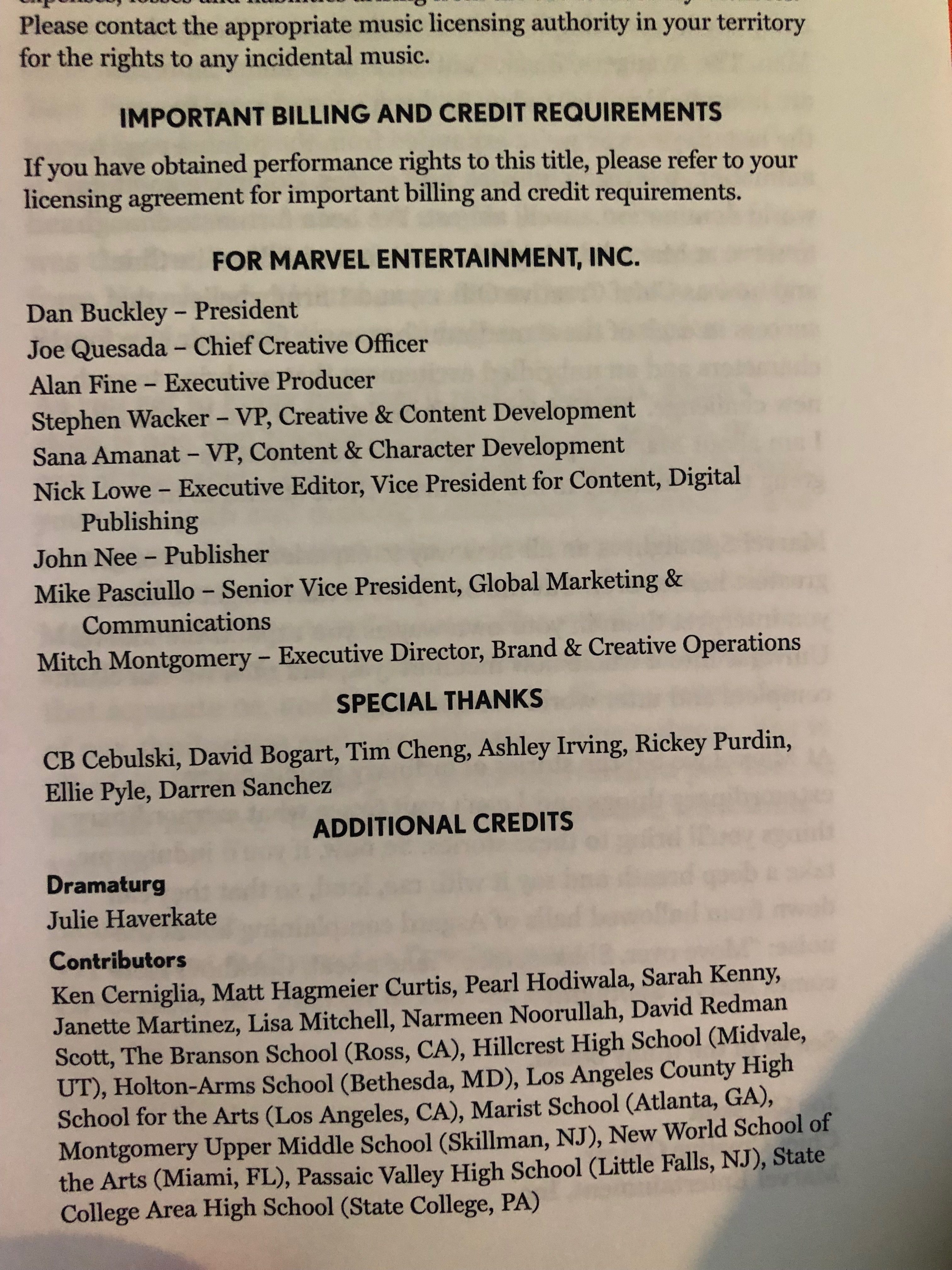 All three plays in the Marvel Spotlight Series are one-act pieces – running time for Squirrel Girl Goes to College is under an hour.

DOREEN/ SQUIRREL GIRL is strong, agile, smart, spunky, and feminist. Her powers include being able to communicate with squirrels; TIPPY-TOE, her squirrel sidekick, speaks English in the script so the audience can understand.

Squirrel Girl Goes to College follows some aspects of the plot of The Unbeatable Squirrel Girl comic book series.

You can read more about Ms. Marvel on Marvel’s website.(She has a “retractable knuckle spike”!)

The plot, in a few sentences: DOREEN arrives (with her squirrel sidekick, TIPPY TOE) at Empire State University eager to make some true friends and keep her identity as SQUIRREL GIRL secret. DOREEN soon becomes pals with her smart roommate, NANCY, and a potential love interest, TOMÁS. The three friends love their computer science class, taught by PROFESSOR BRIGHTMIND and bond over childhood memories. But after BRIGHTMIND is kidnapped by FREAK and MODOC,  DOREEN begins to suspect that she can’t have the life of a normal, rather than a, “SQUIRREL” GIRL. Everything works out in the end, with the help of the power of theatre!

The play has a SQUIRREL CHORUS – modeled after the Ancient Greek convention – that gets plenty of fun moments. They sing “a fierce theme song of their own creation” (9) to accompany SQUIRREL GIRL’s lyrics in the Prologue, and they deliver several punchlines.

Another instance that combines improv rules and irony of wrecking a character’s own literary work occurs toward the end of the play (42):

CHORUS: Yes, and…
SMARTNOGGIN: But no!   My bad work is not done! So my new job will be Mean Non-Constructive Theater Critic…and I will destroy this play!

(I definitely want to see a play with Mean Non-Constructive Theater Critic as the main character!)

Moments in the script that would otherwise be formulaic – such as when DOREEN banishes TIPPY TOE to the tree outside her dorm window – become self-referential with the characters’ reactions to them.

DOREEN keeps her squirrel powers a secret even after her crush TOMÁS reveals that he was bitten by a chemically-altered chipmunk (what are the chances?) and has resultant chipmunk acrobatic skills; students may have a hard time figuring out why DOREEN does this. Let them justify her actions from DOREEN’s perspective; it’ll be good practice for when they have to understand how Romeo and Juliet managed to mess up such a seemingly simple plan, or why Othello fell for Iago’s setup. 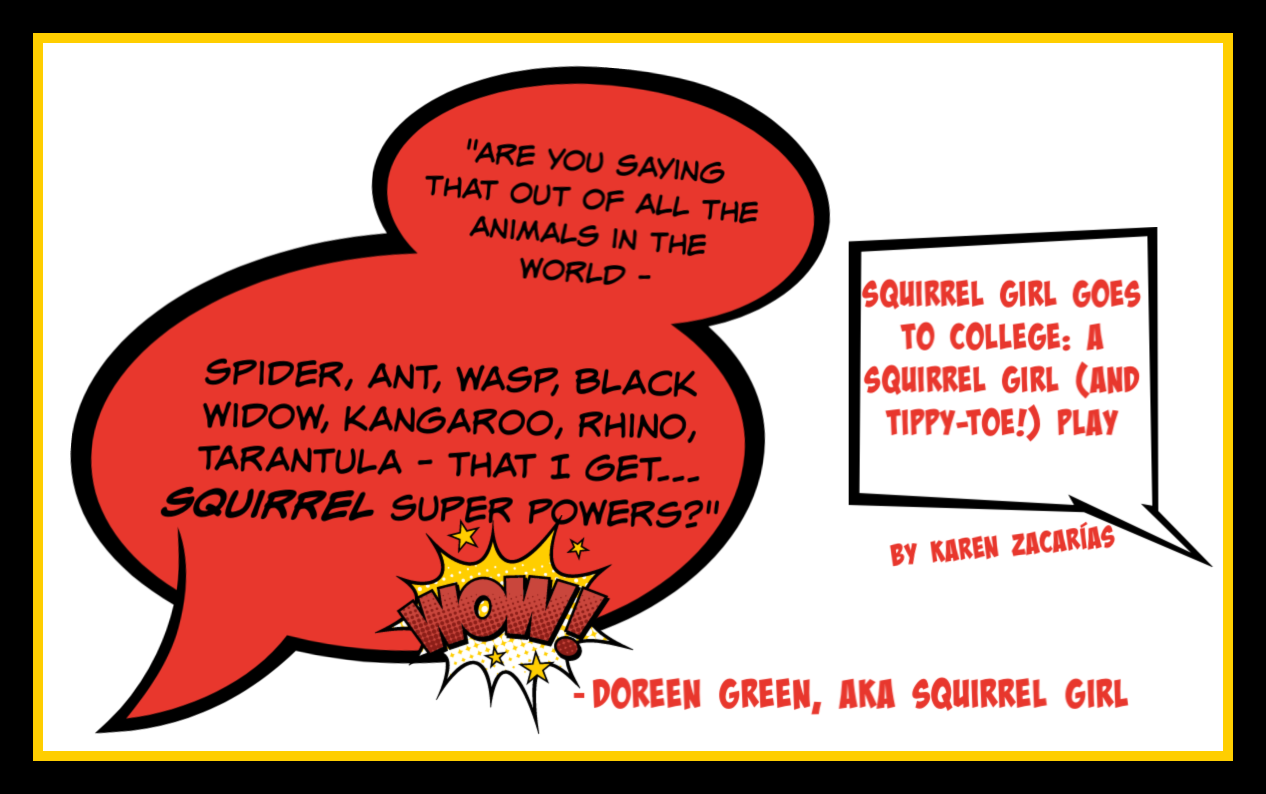 Squirrel Girl Goes to College: A Squirrel Girl (and Tippy Toe) Play would be a good selection for beginning theatre students in early high or late middle school. If you’re teaching an Introduction to Theatre course, the casting allows for a wide range of abilities; doing it as an end-of-course production project is a possibility.

Advanced students could challenge themselves with more complicated technical elements and staging. If you have actors with gymnastic skills, there are opportunities to incorporate these, although the play doesn’t have traditional stage combat.

From a literary perspective, determining whether the piece best fits the definition of parody, farce, or satire could be part of a larger unit in a drama class.

Karen Zacarías emphasizes in her “Author’s Note” that Squirrel Girl Goes to College is a comedy, and she keeps the script’s self-awareness of this fact front and center. In the “Production Notes,” she details how different elements of the production reflect theatre conventions. Components like the SQUIRREL CHORUS, TIPPY-TOE’S direct address of the audience, many characters’ recognition that they are characters in a play, all contribute cleverly. Theatre even saves the day (I won’t spoil it by telling you how!). Zacarías combines the conventions of both the super-hero genre and the theatre, along with metafictional techniques, into an easy-to-understand introduction to all three.

A Note About Costumes:

In the comic books, SQUIRREL GIRL very clearly has a tail.  But she also wears one of those Alice bands with the ears on them. I’m not sure if it’s for cuteness, or if she’s wearing it to cover up the fact that she has an extra (rodent) pair of ears. In the first scene, during a flashback, Doreen’s tail is described in the stage directions as being on the graduation gown Doreen puts on has the script. Productions will have to make a decision about whether Doreen’s tail is visible after her secret identity comes to light, I don’t know if she’s hiding it, but if that’s the case, the “comfy pants” that DOREEN references in her “Origin Sketch” would be in order.

I have assembled a VERY SHORT list of “Considerations” to help teacher-directors. These are aspects of the play that, in an ideal universe, wouldn’t cause a problem for a teacher-director. But if the powers that approve or deny your proposed production will have difficulty with any of the following, or you have members of the school community who will, be prepared to defend your choice. Squirrel Girl Goes to College should pass all but the very strictest of approval processes.

Also, this list is just what I’ve noticed in the play (basically language, romance/sex, violence, political hot topics) that, based on my experience and knowledge of past challenges to educational theatre pieces, may cause an objection OR a request to change the script.

That’s all I’ve got; I feel like I’m stretching to find things would-be censors could find possibly objectionable!

I mentioned earlier that DOREEN/ SQUIRREL GIRL is a feminist. So if you’re teaching at a place where the administration is going to have a problem with a girl superhero who defeats (possibly male) villains, this is not the play for your program. 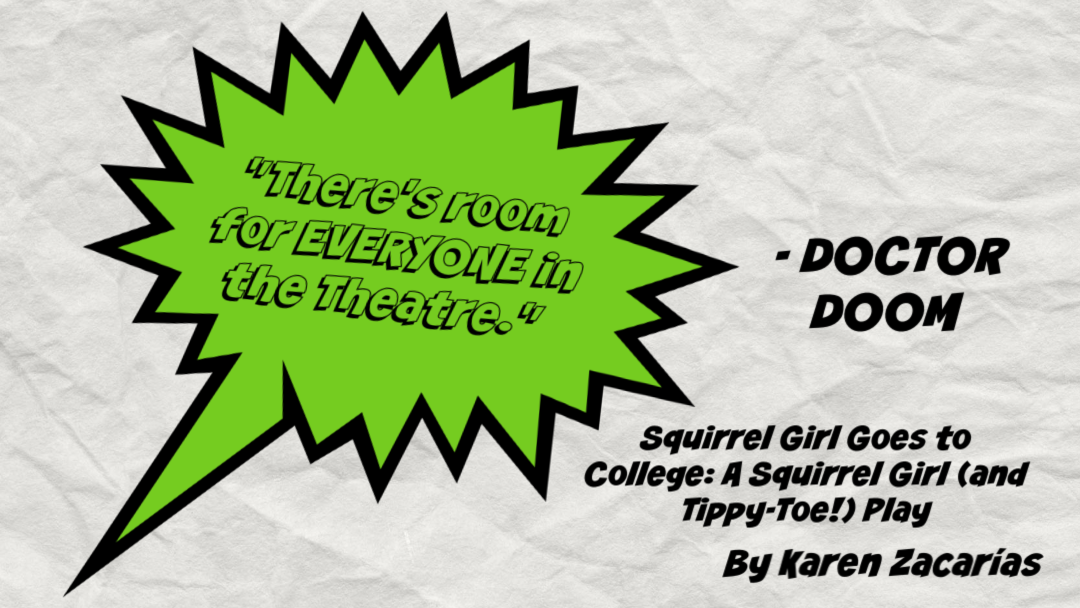 Karen Zacarías is the award-winning author of over 10 plays. With composer Deborah Wicks, she’s written the Theatre for Young Audiences musicals Ella Enchanted, Ferdinand the Bull, and Looking for Roberto Clemente, among others. Dramatic Publishing is the licensor for most of her works.

This month, Zacarías tied with August Wilson and Ken Ludwig on American Theatre’s list of Top 20 Most-Produced Playwrights for the 2019-2020 season. She has 15 productions of her plays arriving on professional stages around the United States. 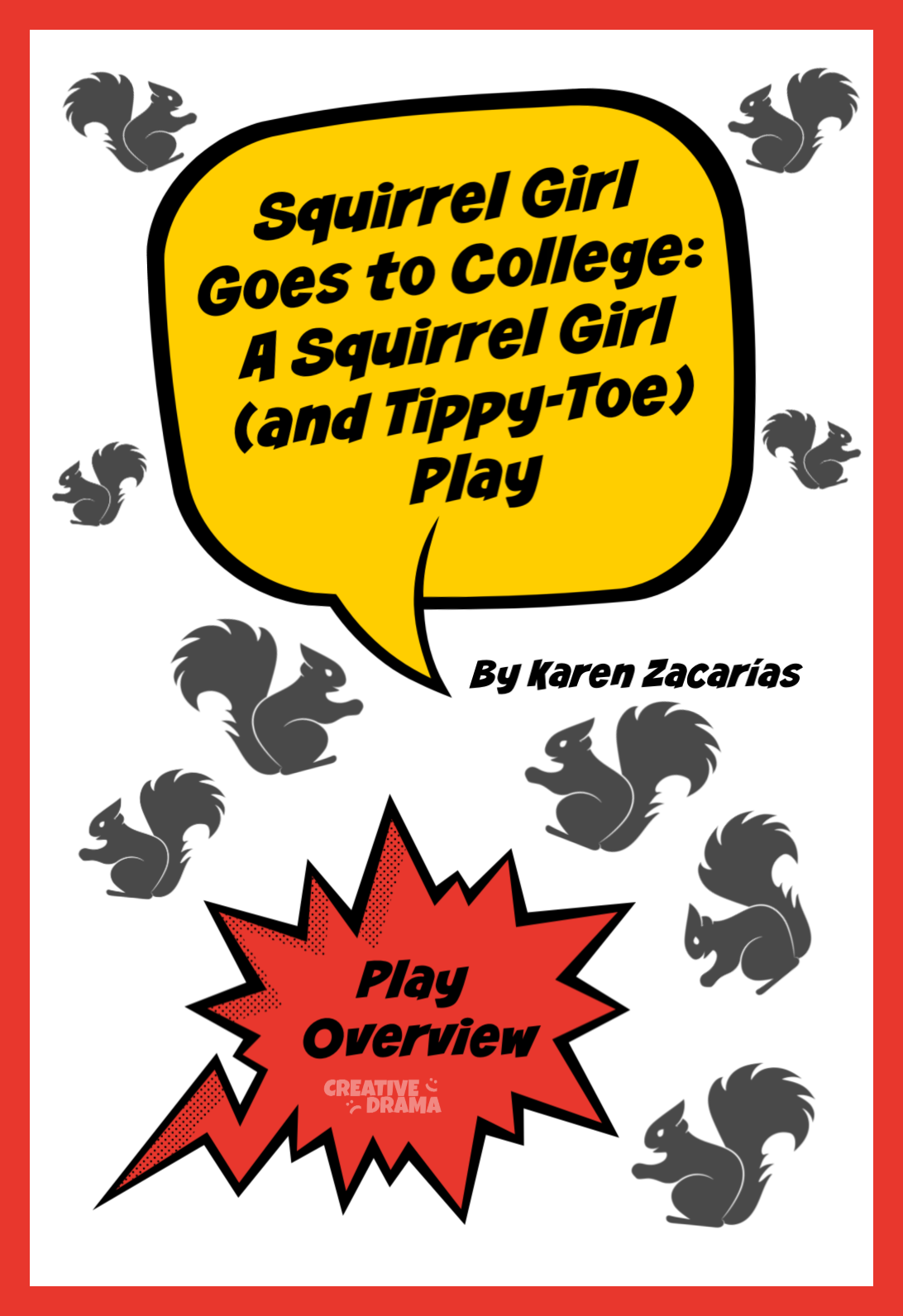 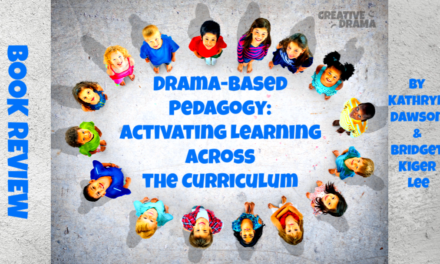